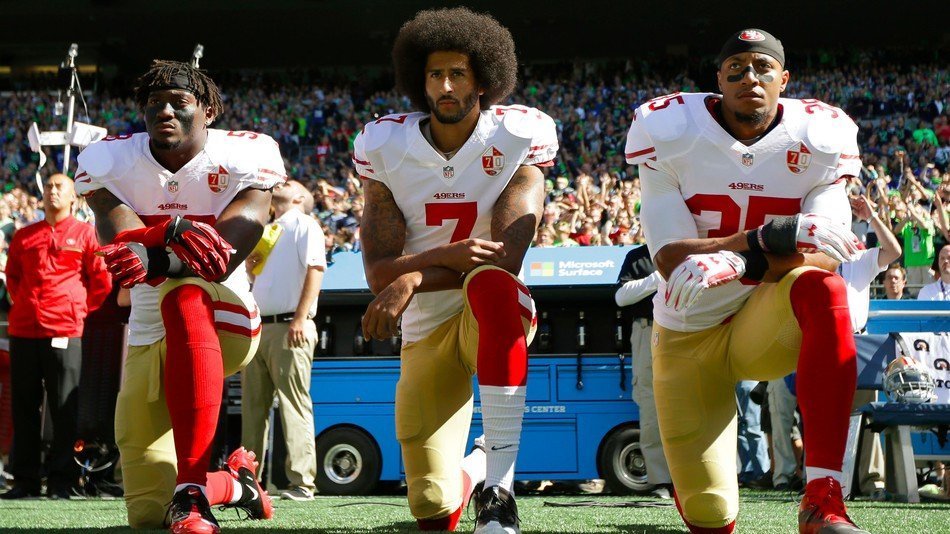 Without you, this topic would not exist.

But it does and now it has caused all kinds of mixed emotions.

Hate, love, respect, and all the emotions that come with very touchy subjects.

What do you make of all this?

It’s not that easy to really understand unless you really sit there and think about what is really going on.

The media has their usually bias take on the matter and obviously other athletes do as well.

Then we have the soldiers and veterans that are actually kind of neutral on things, so I figured I’d give my two cents as well.

Being a veteran and proud of the service I have given for my country, I too have my opinion on the whole kneeling during the National Anthem.

Of course some might disagree and others will do the opposite but I find it necessary to share my thoughts on such a controversial issue.

So What Do I think About Kneeling During the National Anthem?

Well, there were many thoughts that run through my head when I first saw Collin Kaepernick take a knee during the National Anthem.

I flat out thought it was absurd.

He’s disrespecting the flag, our National song, and everyone who has fought or even lived by the values that come from such pride.

To top it off, I had no clue as to what these guys were doing it for in the first place.

Come to find out that they were doing it in protest for racial inequality.

This is where things took a different turn and the analyzation began.

Was this really worth it?

Was this the place for such a protest to take place?

There were many things I could not answer immediately but eventually I came up with at least something.

Kneeling during the National Anthem was a complete disrespect to the United States of America.

You can protest all you want but there is a time and place for that to happen.

I totally get that you have the power to influence others as a superstar and there is no better place to get attention than through the TV and every other media source out there.

However, there are a lot more things to think of when it comes to something like this and I kind of changed my stance on things.

After Doing Some Thinking

I still disagree with kneeling during the National Anthem for one reason.

It sets a very poor example for our kids.

You can bet that this issue will have them acting more like brats but that is about all the bad I can get from this.

Now when it comes to fighting for what we believe is right, I think these athletes might just have a point.

This is a big issue and one that seems to happen even more now that the media has drawn a lot of attention to it.

If the government is not going to stand up for us as citizens and let these crooked cops get away with murder (literally), then what are we to do?

The same idiot cops will do the same idiot acts and we should just sit here because nothing is ever going to happen?

I don’t think so.

The system is corrupt and there is nothing being done to protect even those that are fighting for what we believe in.

They are dying and working their butts off so that these cops can go out there and shoot innocent people for no reason?

Something needs to happen and if it always gets pushed to the back of the file cabinet, then hey, maybe this is a way to send the message.

There was a post in Quora that had a great way of making you see the bigger picture and I think it’s only best to share it here.

This was posted by a member on Quora but even he quoted someone else who actually came up with it. 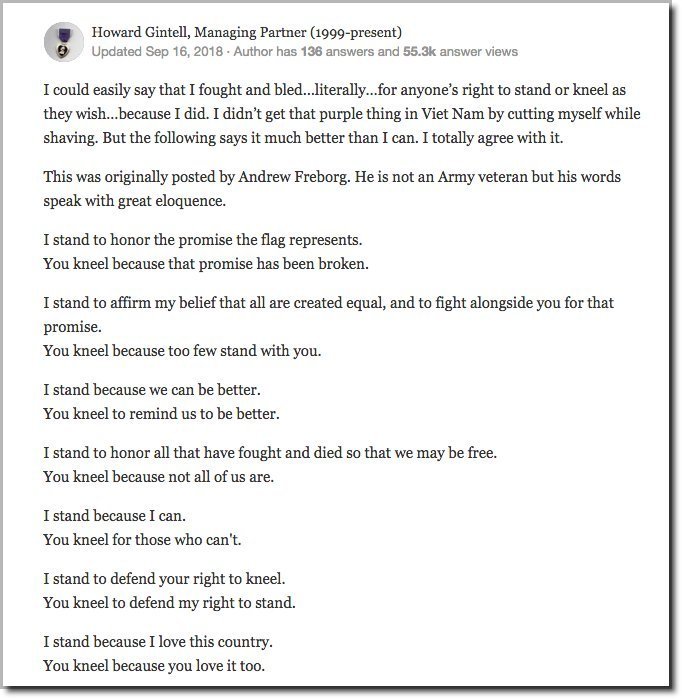 Do I Agree With the Kneeling?

There are way too many people out there that are dying from those that should be protecting us and it is not right.

And when people are trying to get their point across without anyone helping, there comes a point where you have to take matters into your own hands.

I will admit that I was completely irate about this issue and I looked at Collin Kaepernick as a little whining baby that needed attention.

I will also admit that I was wrong.

There is nothing being done to protect citizens from those that think they are above the law and I do believe that this will send a message.

It might not be the best way to do it but when you have a system that isn’t even trying to help, sometimes you just have to take matters into your own hands.

Agree to disagree is how it will usually end but I’m curious as to what you all think about this.

Is it okay for ANYONE to kneel during the National Anthem?

1 thought on “How Do Veterans Feel About Kneeling For the National Anthem?”