This is How You Make Real Money Online

As a newb looking to make real money online, it absolutely sucks.

Everyone and their mothers are looking to recruit you so that they can make money.

Scammers entice you with the best of baits, that you often take just to “see if it works”.

It gives me a headache thinking about the process needed to find something that can actually pull through.

Don’t worry, I was in your shoes before.

Now my online journey didn’t start there, as I actually got involved with some network marketing, early in my young adult life.

Being that was all I knew, I thought it was the only way to get out of the rat race.

I joined a gig called Melaleuca and realized that it wasn’t as easy of a sell as I thought it would be.

And no, I don’t think it’s bad, as I still think any MLM will beat any J-O-B out there.

It just didn’t work out for me, so I decided to do more digging and turned to the internet.

That research led me to some of the craziest scams you can think of and I joined my first high ticket ponzi scheme ever.

What did you expect from a desperate young parent looking to change his life?

To make a long story short, I dumped about $10k into someone else’s bank account.

They flashed it all over social media so that others could join them.

The idea is to show you made money and hope that others follow suit.

I eventually cut my losses and decided that it was time to move on.

After that, I ended up doing surveys with sites like Swagbucks, but that didn’t cut it either.

The amount of money I made per month was not enough to even pay my utilities, so I had to figure something out.

Back to Ponzi-ville I Went

Being that I was still apart of that same scam, I decided to try to pitch it to some of the new people I met on Facebook.

There weren’t any takers but I did run into this dude named Scott, who was willing to hear me out.

Thinking he was actually interested, he also explained what he did but didn’t try to sell it to me at all.

He did mention a company that I had already heard of before but I told him I was going to try other things first.

That’s what I thought until he told me he was making around $2,000 per month.

If I could make half of that, I would be ecstatic and wouldn’t feel so bad for giving $10,000 away.

He told me I just had to follow the training, take some action, and most especially, not to give up.

That’s exactly what I did and wuddya know?

Nothing happened overnight and no I wasn’t rich in a couple of months.

I put in the work and had the patience to plug away at something that didn’t offer instant gratification.

So what program was this?

It was a site called the Wealthy Affiliate.

That is the same exact site that allowed me to work from home for the past 5 years and it is also the site that I want to talk to you about today.

This is also the same site that took me from Broke Veteran to online entrepreneur, for some of you who don’t really know the whole story.

Not the cutest of stories but that’s my life in a nutshell and that’s how everything went down.

So What is Wealthy Affiliate? 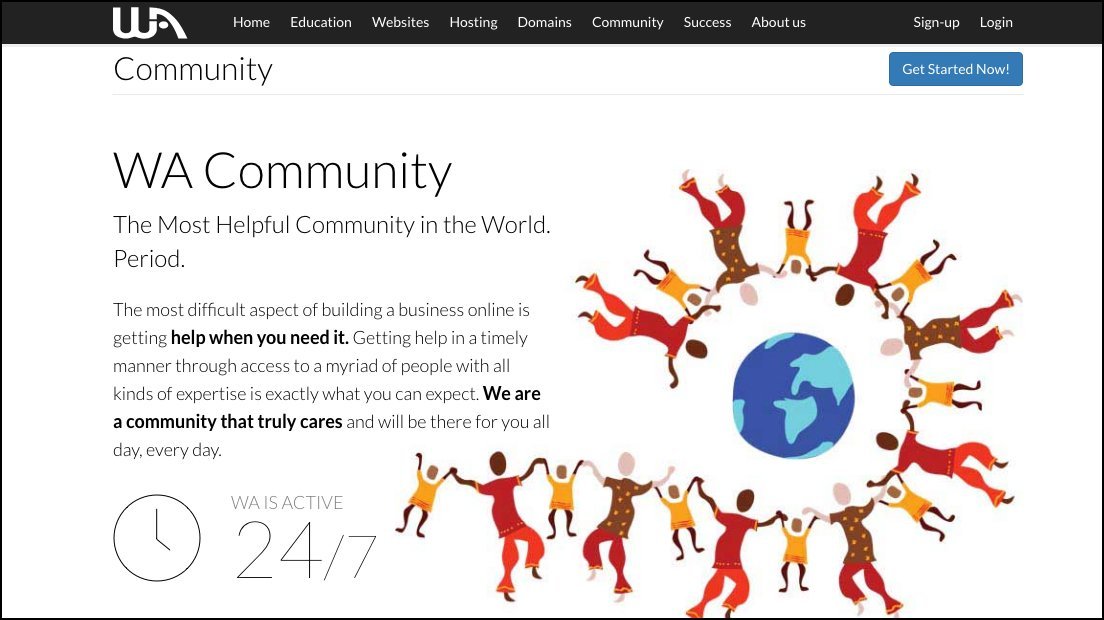 If I was to sum this site up, I would refer to it as a hub for online entrepreneurs.

Now there is a lot more to it that it would literally required a couple thousand words to accomplish.

So what I will do is try to give you a very summarized version so that you can see why I too, recommend it to others.

Initially, WA is where you will learn how to make money online using the affiliate marketing model.

That’s what they cover mainly but they have hours of training that cover other aspects of online marketing.

What is affiliate marketing?

It is nothing more than taking other people’s products and selling them to make a commission.

On top of the training, WA consists of a community that has thousands of online entrepreneurs that are all doing the same exact thing you’re doing.

They will offer help and advice that can be done through the site but most especially their live chat feature.

There are so many reasons why but I will try to keep it to nothing but the most important ones.

Just do know that there is no other site like it out there.

You can take my word for it or you can go out there and try to figure that out on your own.

Or you can see what I’m talking about below. 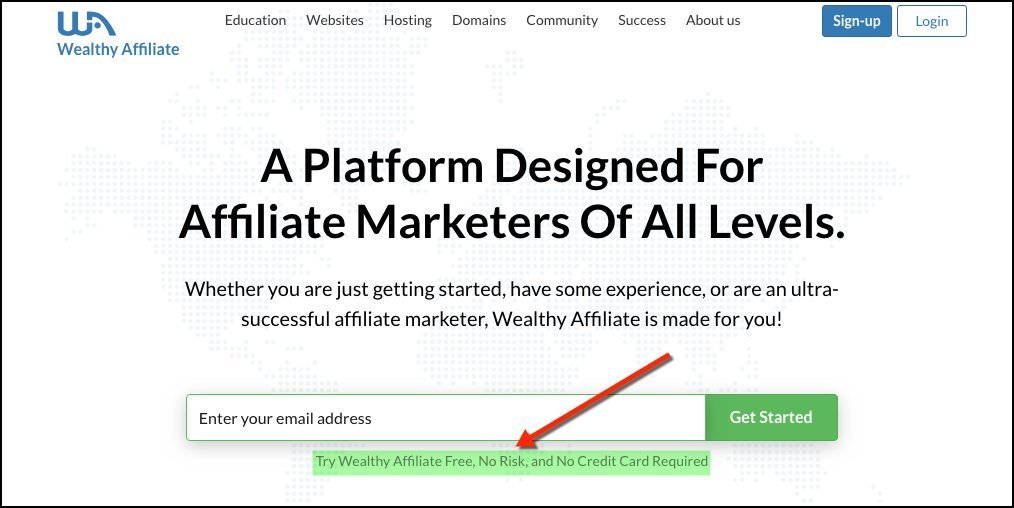 Nothing in life is free.

Even if something is free, there is always a catch that usually results in money coming out of your bank account.

With WA, you get a completely free trial that does not require any credit card information.

Might sound a little too good to be true but it’s really not.

You can join for free and see what it’s all about.

If you don’t like what they have to offer, you simply do nothing.

And yes, it is really that simple.

There are all kinds of free training on how to make money online but none will ever compare to what WA has to offer.

Well, one thing, they update their training as soon as there is an update.

Then there is a live training done every single Friday that comes with the most current strategies on how to make money online.

I seriously don’t know how many lessons there are inside of WA but I know it is a lot.

A lot of training but very organized and straight to the point. 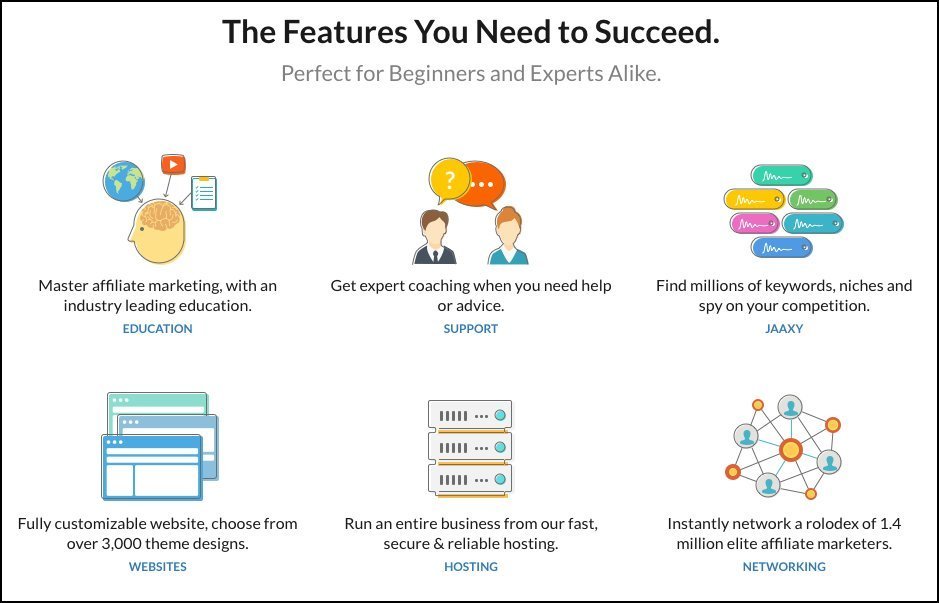 In the world of making money online, there are several things that you absolutely, positively need.

There is no way around it and it is almost impossible to make money without them.

With WA, you literally have everything you need in one place.

Forget about getting one thing here and another thing somewhere else.

You have everything you need all on the same site that is teaching you how to make money in the first place.

You won’t find anything else like it out there, so don’t even try.

Some have tried to compete but none have come close.

Forget about getting a response through email or some forum that will only confuse you more.

WA has all kinds of threads of questions that come with answers from other successful online marketers.

Not some newbs that think they know what they’re talking about.

On top of the plethora of answers, the owners (Kyle & Carson) get on there on a daily basis, ready to answer any questions you might have.

Now can you guess what the best part about the support within WA is?

If you need any kind of support with your soon to be business, I’m your guy.

I don’t charge a single penny for the extra help, as long as you’re a member inside of WA.

And if you think coaching is free or even cheap, just know that any guru coach will charge you a couple thousand dollars just to tell you what affiliate marketing is.

This is no exaggeration either, as I charge at least $500 for people in my area that want me to explain what online marketing is.

Oh and this is not something I had when I first started, so consider yourself lucky.

Get 1 on 1 Coaching From Me Here

Not a single program that teaches you how to make money online has been in business longer than WA.

For 14 years (and counting), WA continues to thrive and improve the service they provide to online entrepreneurs.

And with over a million members, you can bet that they are really trusted.

Now I can sit here and tell you all day about how awesome this program really is but so can anyone else.

I maybe be one that has found success with WA but there are thousands more that can attest to this same exact program.

6. No Recruiting to Make Money

Like I mentioned earlier in this post, I have no problem with making money by getting others to join you.

However, it is not for everyone and those kinds of business usually don’t last.

Someone will join under you and then quit the following month, leaving you discouraged.

And no dealing with crazy pyramid style businesses that some consider a ponzi scheme either.

With WA, you do not need to recruit a single person in order to make money and you will see that even in the first lesson inside of WA.

7. You Make Money With Real Products

In the real world, you make money by exchanging money for goods or services correct?

However, everything will be done online and you will not have to try to sell anything to anyone.

You simply provide the information they are looking for and the internet will do its thing.

Definitely what you will learn how to do, so go and see for yourself.

You and I both know that there aren’t many opportunities out there.

And I’m sure we can both agree that there is more to life than working, going home and doing the usual routine over and over again.

If you want to make something of yourself or you simply want more time and freedom, this is one of the few programs that will allow you to do such a thing.

I went from fighting bad guys in Iraq to riding my bike to different coffee shops to run my online business.

I can help you do the same as long as you have several of the things necessary to succeed online.

If that is something you can understand, then I am willing to give you my time.

Just get signed up below and you can start a journey that I’m sure you will not regret.